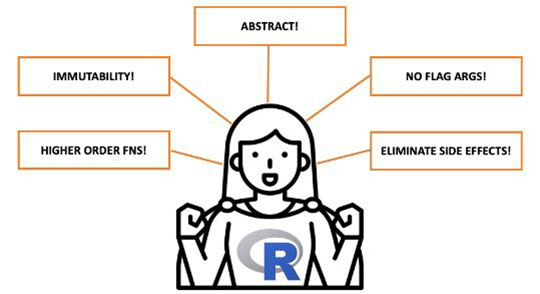 This blog post is about writing better code. In particular, we focus on methods commonly espoused by functional programmers. A lot of the subsequent ideas presented are inspired by the works of Eric Normand and Robert Cecil Martin, and by my own share of recent trials and tribulations involved with refactoring legacy code.

Primarily, we write better code to reduce technical debt. Technical debt is the implied cost of additional rework caused by coding an easy solution1. It’s essentially a trade-off. You could build an easy and quick ad hoc solution and spend more time debugging/modifying the code in the future or spend more time on a robust solution and spend less time debugging/modifying.

We refactor or rewrite existing code when technical debt is high enough. Such a decision is in no way trivial, though an oversimplification (as shown below) might be helpful in thinking through it.

We shall now look at a simple case study to illustrate some of the best practices of functional programmers. Introducing NoviParlor: Durham’s newest ice cream shop. You are tasked with writing code that calculates the final price of placed orders. The final price takes into account: 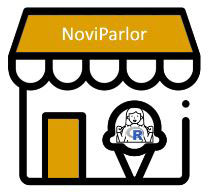 The data we are given as input follows the list structure shown below.

Now let’s look at some hastily written, though working, code. This is meant to represent someone’s ad hoc way of coding up the solution.

While the code gives the right output, there are a few problems with how it was written that stick out. Let’s address these by diving into the next section: the 5 tenets of functional programming.

One of the biggest challenges in programming is working with a global mutable state. But what is it exactly? A global variable is one that is accessible from any other point in your code. Mutable means that it can be changed. The state of a variable can be thought of as an instance of a variable which depends on when and where it is run in the program.

In the code example above, “total” is a global variable, and its value is modified in multiple places in the code i.e. it does not maintain state. We want to avoid having such a variable. And if we need to have a variable accessed several times, we wish to limit the scope of that variable as much as we can.

By removing these variables our code becomes more predictable: we don’t have to guess what the value of a variable is as (1) it’s not accessed in multiple places and (2) its value doesn’t change. By modifying “total” frequently, we also place an undue burden on the order of our code, which can easily break when modifying/adding code.

Here’s a silly example demonstrating this.

When modifying “x” in-place, the order in which we call “print(x)” makes all the unfortunate difference. In Functional Programming (FP), modifying a variable after it’s been initialized is heresy.

Side effects are anything a function does other than returning a value. A pure function is a function with absolutely no side-effects, and the return value is only determined by its input values. This is a strict definition and below we show three cases:

Side effects are usually inevitable (in practice) but we must try to minimize them as they introduce more places where code can break. Going back to our NoviParlor code, we see many instances of side-effects. We have side effects in the form of variable assignments (like “price_scoops”) that can be eliminated or decomposed into smaller functions.

A flag argument is a function argument that tells the function to carry out a different operation depending on its value2. Flag arguments reduce the cohesion of a function, so we try to avoid them.

In example1() below we see a flag argument that changes the behavior of the function. It looks harmless but things get messy when (1) the flag argument can take on many possible values and (2) when more flag arguments are introduced (as in example2()).

In our poorly written code example (above), ApplyDiscount() has three flag arguments: novi_employee, statistician and over_20.

To better address tenets 4 and 5, let’s look at some well written code.

Abstraction might be controversial to bring up here as it is commonly associated with Object Oriented Programming (OOP). But FP can be extremely helpful in managing complexity, and abstraction is one way of doing so. Not to mention it’s used all the time.

Abstraction, for the unacquainted, is taking a specific problem and making a general solution for it. To drive a car, you do not need to know how the engine works - you only need to learn how to utilize configurable parameters (steering wheel, gear etc.) that depend on the lower level components such as the engine. Of course, a balance is required as abstracting away too much functionality leaves us with a system that is harder to modify. Generally we keep configurable data at high levels. In our well written code example, we use the function apply_discount() that depends on lower level calculations to get the price after discount.

Remember the for loops used in the bad code example earlier? In the well written code example, we use map2() and reduce() (from the purrr package) to find the dot product of two vectors to calculate the sum total of the price of ice cream orders (before discount). These operations are vectorized (so generally faster), easier to understand, and reduce duplication of code.

The real beauty of functional programming is that it deals with beneficial, universal coding practices. The tenets discussed in this blog can be used regardless of what programming paradigm (object oriented, procedural etc.) you choose. Note, the “tenets” discussed in this post are by no means universally agreed upon and are also by no means hard rules to follow as exceptions always exist. They are merely perspectives that could help you build robust and maintainable code.

As the industry's best-in-class, complete real world evidence (RWE) solution, Target RWE is a distinctly collaborative enterprise that unifies real world data (RWD) sets and advanced RWE analytics in an integrated community, shifting the paradigm in healthcare for how decisions are made to improve lives.